It's been a busy month here in Jackson Hole, ever since grizzly 399 came out of hibernation with her four cubs in mid April.

Since then, she's been all over the valley on a kind of 'farewell tour' for the cubs.

Now safely back in Grand Teton National Park, she has kicked out the four cubs (or weaned is the more appropriate term) this past Wednesday into Thursday.

2.5-Year old grizzly cubs are typically weaned when the sow is ready to mate again and, lo and behold, the day after 399 kicked out the cubs, she was seen in the presence of one of the biggest male grizzlies (or 'boars') around here: a bear named Bruno by the locals.

Seeing that the average wild grizzly bear lives to be 20 to 25 years old, could 399 at the current age of 26 possibly have cubs again this coming winter ... and live long enough to raise them to 2.5 year olds???  If any bear can do it ...

In other great bear news, one of grizzly 399's other surviving offspring came out of hibernation this past week: grizzly 610, born in 2006 and also already at the respectable age of 16, showed up with 3 new cubs (or 'coy' = Cub Of the Year).

So far, 610 has been avoiding the humans and has stayed far up the slope of a hill in the northern section of the National Park.  I was able to made (far-away) video of her and the 3 cubs playing, rolling down the hill, ... I'll post that video when I have better WiFi available.

The other local celebrity grizzly bear, Felicia, who lives in the National Forest outside of the National Park borders, also came out of hibernation recently with her two cubs in great condition.  She'll be kicking them out in the spring of 2023 so one more year to enjoy them.

Keep in mind that Felicia lives outside of the protection of the National Park and its Wildlife Brigade who keep the park bears & visitors safe.  When you go to see her, use the highway pull-outs and DON'T stop in the road.

When the Game & Fish staff sees that the traffic becomes a safety problem along they highway, they DO haze the bears: best case scenario, they use cracker shells which basically scare the bears with a loud bang.  Worse methods they use are shooting the bears with rubber bullets and recently they have even started using trained dogs who charge the bear: a scenario that may end badly for the dog and/or the bear cubs especially!

I accidentally observed the bears being hazed with a dog and it's not a pretty sight, so please, do what you can to keep the bears safe.

And, finally, since this posting wouldn't be appropriate without an actual grizzly bear image ...

While mom works hard to keep them safe and to keep herself fed so she can nurse the fast growing cubs ... all the cubs seem to want to do is play.

I found this one rolling in a grassy field in the Tetons as the sun was setting with mom grazing nearby.

P.S. Sign up below if you want to stay updated on the latest grizzly news! 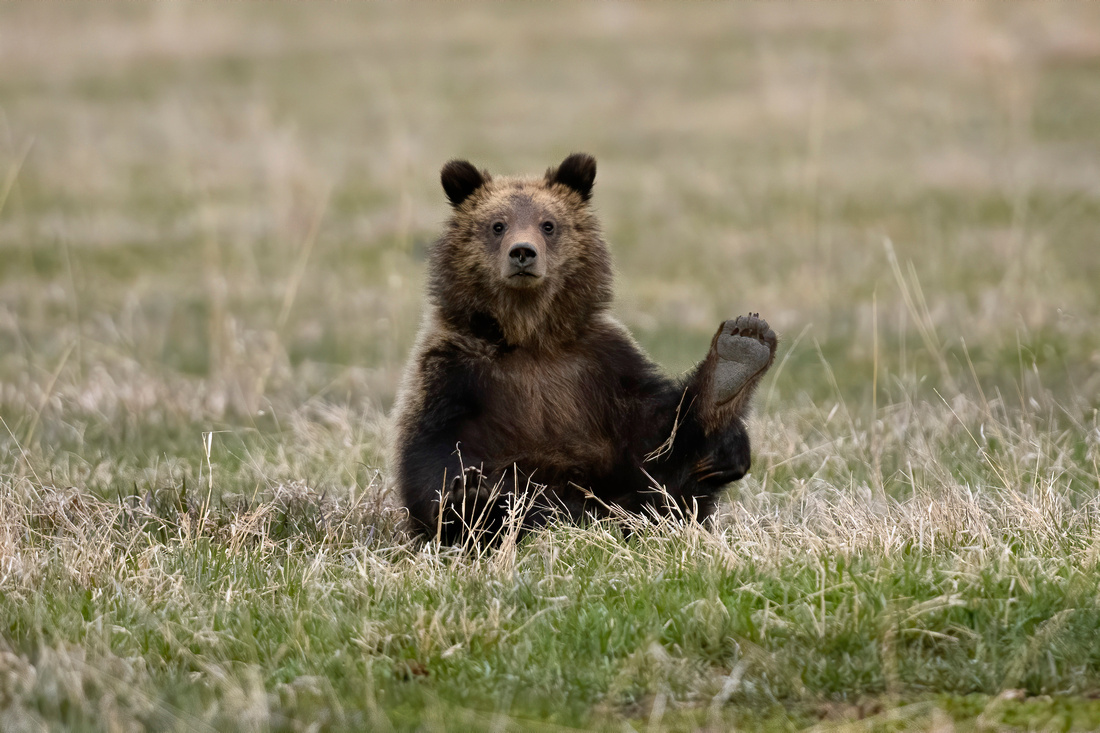 Do you want to get a fine art print of grizzly 399?

Check out my Etsy shop