Even though the town of Guanajuato is sometimes ignored in favor of another colonial town just to the east (San Miguel de Allende), it is a favorite of everyone who visits.

A Unesco World Heritage Site since 1988, Guanajuato (not to be confused with the Mexican State of the same name in which the town is located), was founded by the Spanish conquistadors in the 16th century.  Most of its well-preserved and beautiful colonial architecture dates back to the 18th century when silver was discovered in this area.

The town sits at an altitude of 6,800 ft (2.040 m) on the Altiplano in central Mexico.  The climate is perfect with winter daytime temperatures in the low 70s (21 C) and plenty of sunshine.  At night, the temperatures usually drop into the 40s (8 C).

A typical colonial town, its streets are small (almost too small for anything other than walking) and you definitely want to avoid driving a big RV through town.  The colonial center is where the many sights are located, all within walking distance.  Unlike nearby colonial towns like San Miguel de Allende and Dolores Hidalgo, Guanajuato is crammed in between mountains: I doubt there are many streets that are level, so prepare for a workout! 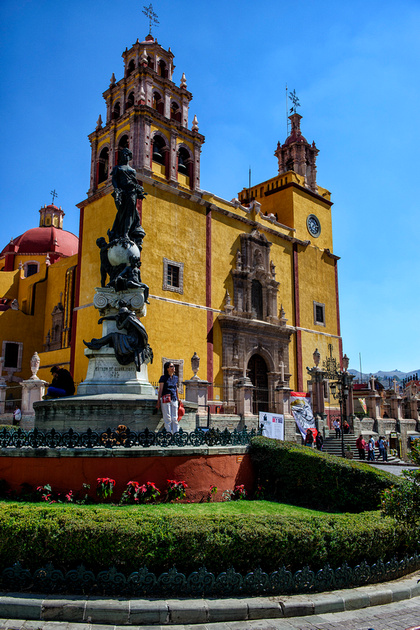 Upon arriving, we drove the Panoramico (ring road) to reach the only campground in town: Morrill Trailer Park.  I was expecting a highway around town, but instead, got a very narrow road. To make matters worse; because of the hilly environment; there are many tunnels and bridges in town ... not exactly the kind of roads you want to be driving an RV on! Several times, we had to get out of the truck to make sure our vehicle wasn't going to hit something.

The campground has a great location in town but, as with many campgrounds in Mexico, it has seen better days.  The 15 amp electrical outlets were hanging out of their sockets and the water faucets were falling apart.  Also, because there aren’t many travelers that make it in here, the owner rents out campground spaces to the locals to park their cars.  The barking dogs in the surrounding mountains make it difficult to fall asleep at night and the locals who start picking up their cars at 6 AM make sure you wake up early!

If you have a bigger RV, you'll probably want to stay at the campground outside of town; Bugamville; or stay in San Miguel de Allende and take a day trip to Guanajuato.  When you're driving, it's best to have a small RV; but when you're parked in one spot for a long time, you wish you had a big RV with all the space and luxuries. No RV is perfect; every type of RV has pros and cons.

Guanajuato is a university town and has more of a city feel than nearby San Miguel de Allende.  When you walk around town, there is a lot of foot traffic and cars.  A good walking tour of town is in the shape of a “rectangle”.  As with any historical town, the downtown map looks like a maze; however, most of the attractions in Guanajuato are situated along four streets that form a rectangle on the map: 28 de Septiembre, 5 de Mayo, Av. Juarez and El Truco.  This rectangle brings you to such sights as the local university building, the Plaza de la Paz, Mercado Hidalgo, Teatro Jardin and Jardin de la Union (the city’s main plaza).  A quick side trip on a cable car lifts you up to one of the surrounding mountains, providing a great panoramic view of the entire valley.

An attraction that is outside of the historical center is the mummy museum.  The museum displays bodies of locals who died during the cholera outbreak of 1833. 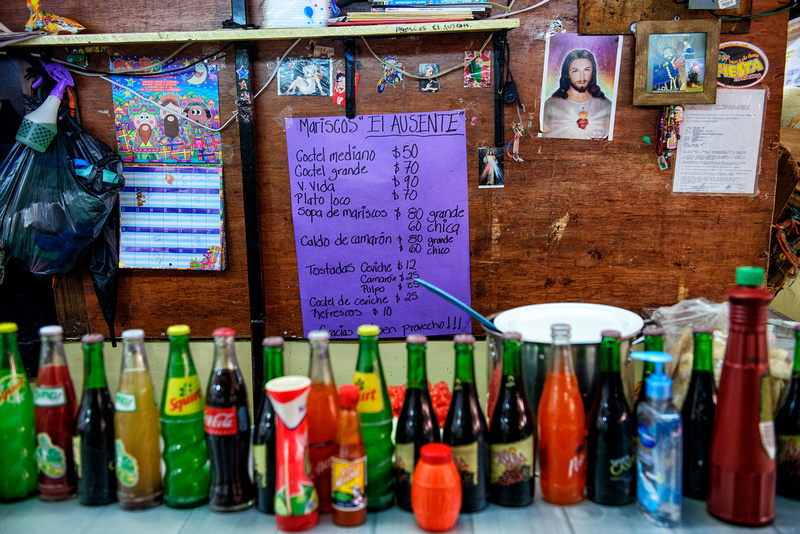 Seafood menu at a vendor in Mercado Hidalgo

Wanting to sample the local food, a favorite stop for us while exploring a city is usually the local municipal market.  Here it is called the Mercado Hidalgo.  Lots of vendors sell popular dishes, including tostados covered with octopus (pulpo), shrimp (camarones) and ceviche: cheap and delicious!

Besides the dramatic location in between the mountains, we enjoyed how colorful Guanajuato was.  From the viewpoint at the El Pípila monument or from the Morrill campground, you look out over the valley with its many brightly painted buildings.  Even the local church is painted in bright yellow! 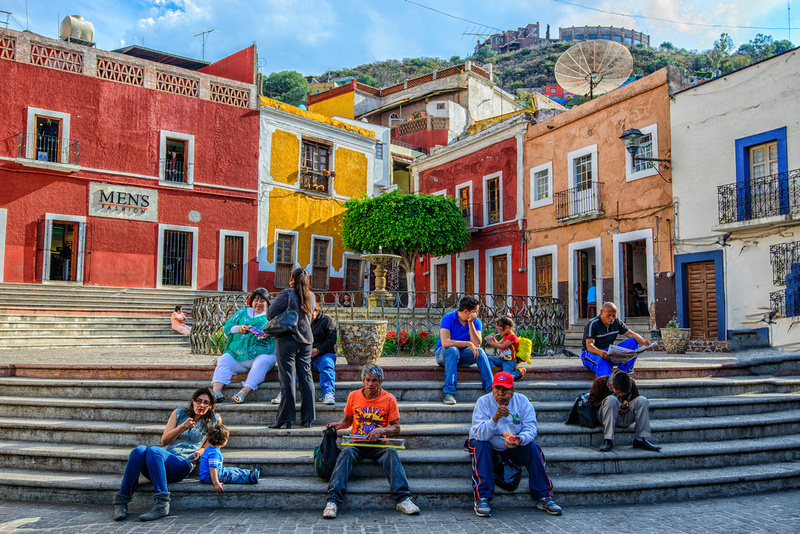 Guanajuato feels like a living city with plenty of people in town on their way to work or to university; whereas some of Mexico's other colonial towns feel more like towns frozen in time, where every building you see is beautifully renovated and every person you meet is on vacation. 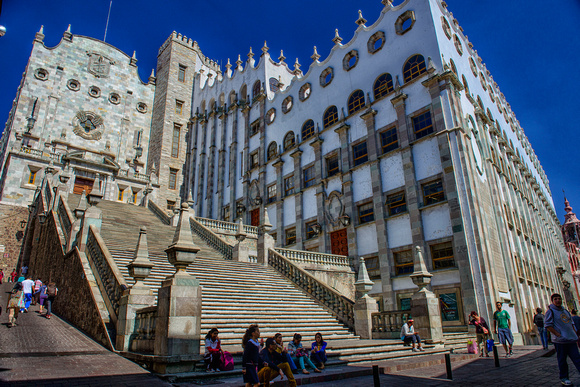