After the warm and prolonged Fall season, Winter is finally arriving in Grand Teton National Park.  Temperatures are expected to drop down to -3 F in a few days (-19 C).

Having fattened up as much as possible during the Fall season, the grizzly bears in the Greater Yellowstone Ecosystem (GYE) are now getting ready to enter the next phase of their life: a cozy winter sleep in their den.

And so too, grizzly 399 is likely to return to her usual denning area north of Grand Teton National Park. 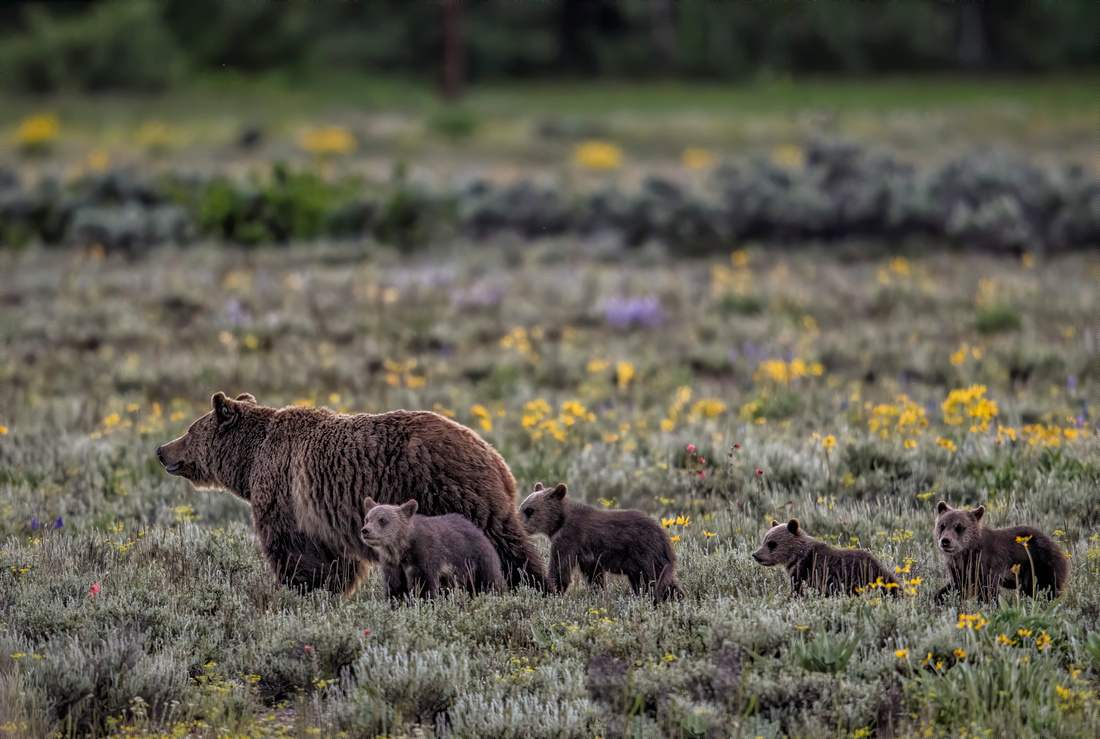 Grizzly 399 and her four cubs in the wild flowers

Yellowstone and Grand Teton grizzly bears typically dig their den before the ground gets too hard for easy digging.  They find a steep north-facing slope and, underneath a big tree, dig a hole which consists of a small passage big enough to squeeze through which leads to the bedroom.

Why North-facing and underneath a tree? Once the snow starts falling and the bear is in its hibernation sleep, the micro-climate of the enclosed den is crucial to the survival of the bear.  If the den were to be compromised, the bear could freeze to death.  The North-facing slope is the coldest due to the lack of direct sunlight, keeping the snow covering the den entrance nice and frozen.  Digging the den underneath a tree provides extra support; preventing a possible collapse; thanks to the tree root system that surrounds the den. 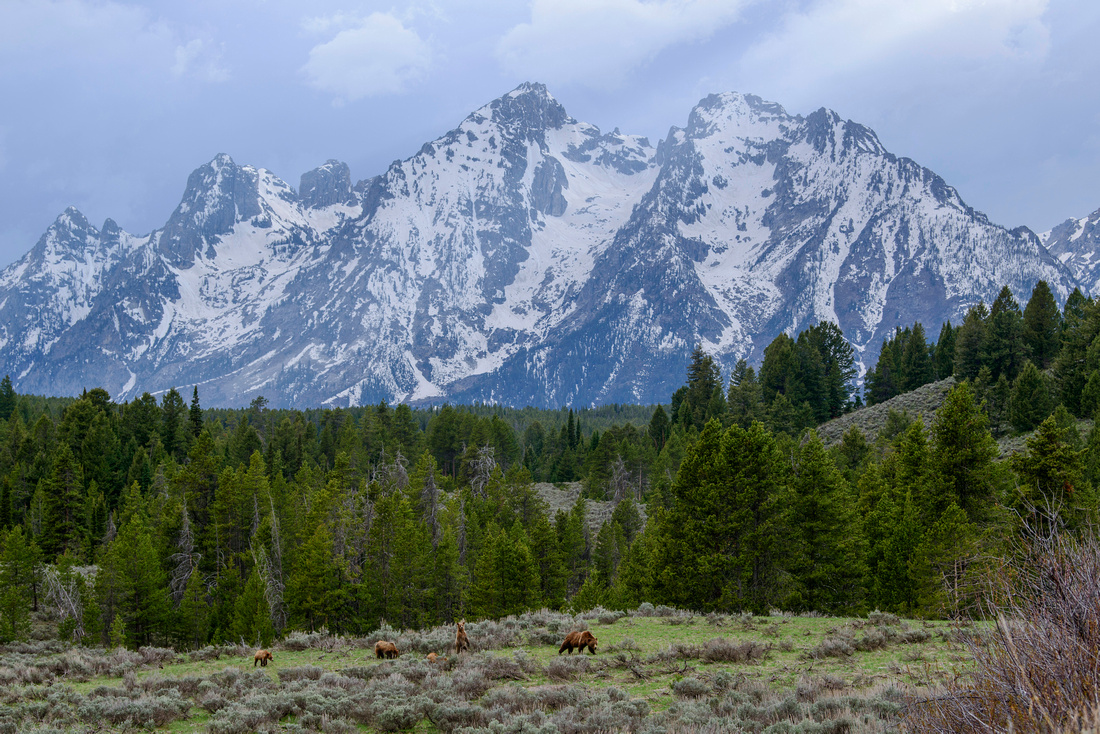 After up to a week of digging, the grizzly's den is just big enough to allow the bear to tightly curl up in; again, the main reason being conservation of heat.  The final step is bedding: a layer of carefully placed vegetation on the floor of the den's bedroom which traps and heats dead air underneath the bear.

Once snow covers the den entrance, the result is a cozy, dry and insulated place for the grizzly to spend the winter.  With temperatures in the Greater Yellowstone Ecosystem dropping down to as low as -60 F (-50 C), inside the bear den, past research found temperatures inside a bear den to be in the - surprising - range of 83 F to 97 F! (28 C to 36 C) 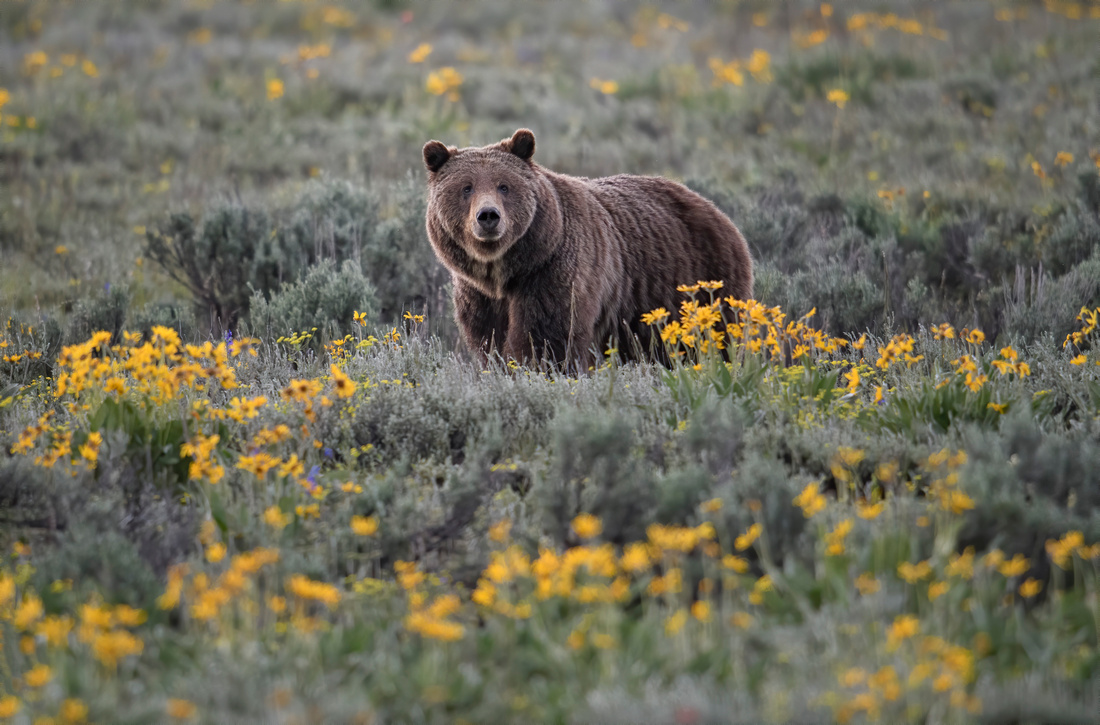 Grizzly 399 in the wild flowers

After kicking out her quadruplets this past spring, grizzly 399 spent a relatively problem-free summer.   She was rarely seen as, with no cubs to protect, she typically doesn't hang out around park roads as much. 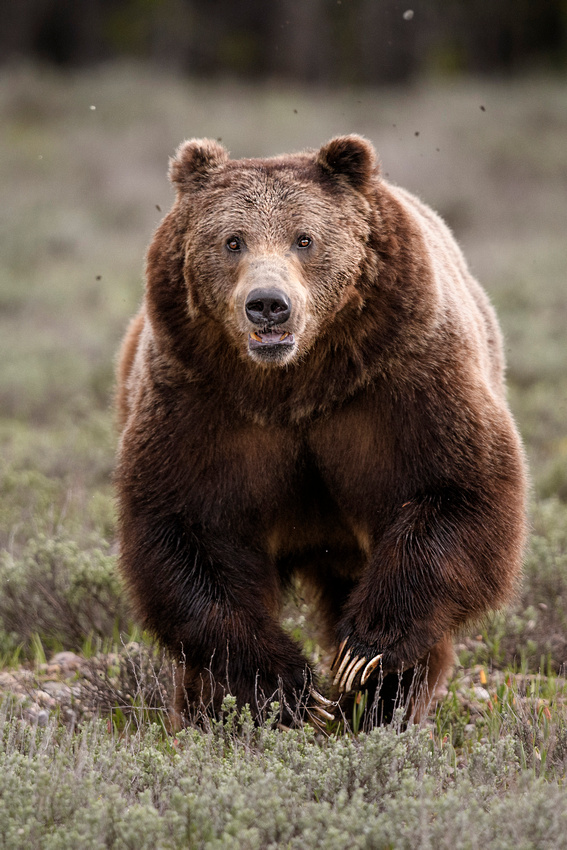 Bruno, the big male grizzly, courted and probably mated with grizzly 399 this summer

This image of Bruno sprinting towards the camera is available as a print here, starting at $45

She was seen being courted by a big male on several occasions.  Turning 27 during this winter's hibernation and with the average Yellowstone grizzly living to be 20-25 years old, her coming out of hibernation in 2023 with new cubs would be nothing short of a miracle.  But then again, she has proven already that she is capable of miracles.  Fingers crossed!

Thank you for voting for the "smiling moose" picture in the Comedy Wildlife Awards!

Jorn
Mo Green(non-registered)
May I vote on you photo of the grinning moose? If so...how please?

I fortunatly own a fasinatibg book called, "Jacobson's ORGAN...and the remarkable nature of smell", by Lyall Watson.
In it you could find a wealth of information which could be an interesting inclusion to that photo background. It could give further interest to this photo's bio
Jorn Vangoidtsenhoven Wildlife and Landscape Photography
My pleasure Lisa! Thanks, Jorn
No comments posted.
Loading...